It’s already more than a month passed by since we started to work on the new episode, and now it’s time to give a first report about the current status.

If you follow our blog, then I’m sure you already noticed the work of Nikolai and Anastasia on the concept design for the main characters. Meanwhile I was working on the screenplay for the episode.

This took some time, because it haven’t come to simple “copy-paste” operation from the original screenplay. I wanted to use this chance to take a fresh look at the whole story and develop a clear concept and logic of all events. Together with Nikolai we had an awesome brainstorming session, digging into the deepness of Morevna’s universe, revealing the past of the main characters and specifics of the world where they live. That gave me a clear understanding of what exactly do we want to show in this episode.

By this moment the screenplay for the episode is finished and got the “approved for production” status. Now we are proceeding to the next stage – storyboarding.

Another important priority of these days is to bring our software department into order.

We already have switched to the new rendering system (see my post about RenderChan) and our synchronization infrastructure is in the process of migration to open-source cloud solution.

Our main animation tool is Synfig Studio and for the past years it was improved a lot. I guess it’s needless to say, that the new episode will be produced using the latest development version of Synfig. For current stage of the project it is important to ensure that the tool is stable enough for production, so last weeks we were concentrated on fixing the critical bugs. As result of this work, we have published the first Release Candidate for the new stable version of Synfig Studio, which is going to be numbered as 1.0 by the way.

In preparation to the animation stage, we also asked our friend Evgenij Katunov to implement a special tool, which will help us a lot in the production of this episode. In the video below you can see the demonstration of this simple, but effective feature.

Usually, we don’t add new features during the process of preparing the new stable releases. But in this case we couldn’t resist and included the new tool to the release branch. So, it will be shipped to you with the second Release Candidate, which is expected to be ready soon.

Finally, since the new version with a lot of major improvements is coming soon, I couldn’t avoid the mention of the fact, that Nikolai Mamashev started the work on updating the Synfig Training Package. By this moment he completed a first draft of the script. It was completely rewritten with consideration of all improvements of upcoming version of Synfig and he also took a chance to create a shiny new artwork, that you will be using for creating animation during the learining process.

Do you think this isn’t related to our production? Well, some might say so. But let’s remember, that the sales of the Training Package has become one of those sources, that helped us to fund the development of Synfig during the last months. The package also helped a hundreds of people to learn the basics of Synfig and increased its popularity. We believe that the new learning pack, together with the new version of Synfig, will help to bring the Synfig project to the new level. And the good wealth of Synfig project is critical for success of Morevna. That’s why we put a special attention on this topic.

Well, that’s all news for today. This was the first production report and I hope to issue the next ones at more-less regular basis. Stay tuned! 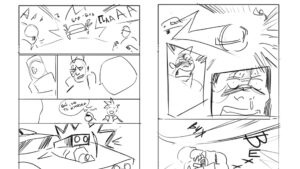