OK, let me announce the project status in numbers: 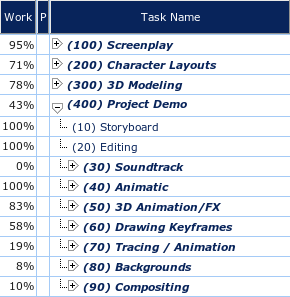 Of course this is a kind of approximated statistics, but anyway – it shows. And I guess you have noticed that finally we have the project animatic completed at 100%. Yay!

So, what do we have? After 3 years of development the project just passed the preproduction stage. As a whole Demo it is hardly crossing 50% boundary. I think it’s reasonable to ask question

Let’s take a look back and talk about the project path, the problems – past and current.

When we just started this project there were a lots of questionable points. Some of them got more less cleared out, some of them still remain. Let’s discuss them one-by-one.

Yes, let’s begin with software. To be honest, I have started this project more being like a software engineer mind, rather than artist. Yes, I had a screenplay, but my main idea was “Hey, let’s do the anime with open-source software!”. Well, there’s nothing wrong about that, but I was fully concentrated on the computer-generated images, totally ignoring the possibility to create artwork with pencil and paper. ^__^ Well, its fun to remember, but I digress…

First of all, we weren’t sure if the software we have chose is able to handle the tasks that we need. For Blender (for 3D works) everything was quite clear – that tool is stable enough and already proven with a series of Blender Foundation’s open movie projects… But 3D in Morevna Project handles just a helper function – Morevna is mostly about 2D animation! And the all burden here comes to Synfig Studio, which is completely different case! Without any usage cases of such scale, questional stability, totally undeveloped character animation techniques… There were few examples of characters animation, but we wanted the complex motion. This most powerful open-source animation tool still had a lots of issues.  We just weren’t sure if this tool will be able to handle all the tasks (OK, well… in terms of faith we were sure, but have no idea how).

Time passed by, we have invested much time into software development, but it deserved that. At the end – one of our main goals is to improve open source tools. And many things cleared out. We have created stickman template as temporary bones replacement for characters animation, developed methodic of character animation, made really complex animations of different types, explored the integration of various open-source tools with each other.  The software performance is still a weak point, but  thanks to the flexible architecture it’s always possible to split complex scenes into pieces and work on them independently. At this point we can say with confidence that it is possible to do any kind of 2D animation with the software at its current state.  Of course there are still some issues appear from time to time, but we have support from Carlos López González (aka Genete) covering us on Synfig development. Thanks to his work there’s no significant blockers on the software side.

When the project just started, the big problem was to find the dedicated artists capable to draw in anime style. The target of making Demo itself was to find the team members who I can rely on. I knew that  to have the project (as a whole movie, not just Demo) successfully completed I will need to search for funding sooner or later. But before doing that I had to be sure that there is a specialists around, capable to do work in the way I’m expecting it to be done. Because even if you have money, it is not makes project complete successfully without talents around.

We were looking for the artists making artwork in anime style, because I knew that I will not be able to handle this by myself. Though, I was drawing scenes by myself just to keep project going.  Also, by the time  the project started,  there was total deficit of specialists working in Synfig and it was a first problem that we considered for animation project. I didn’t knew is there any people around willing to learn Synfig and how much time this learning can take. In addition to that, as I can see now, my expectation from artists were quite fuzzy – I had tools, but didn’t had real technology in my hands yet. I was naive enough to expect every artist go through full production chain. As time passed by my expectation were polished and  slowly project roles were clearing out for me. It took time for me to understand that a person can deliver great artwork for project without digging into any technological nuances.

Time passed by, many outstanding people passed through project and it happen so that I was lucky enough to meet the ones who is sharing the “spirit of the project”.  We have Eleonora Pala as talented character designer and keyframe animator, she have outstanding feel for the characters attitude and I really  hope that she will stick with the project, because her artwork is right what I expect for this project to be. I am happy to work with Nikolay Mamashev – very skilled Synfig animator and also very good at keyframe artwork drawing (he is working in more realistic style, drawing soldiers for the Demo). With him we have polished main methods of making animation of any kind with Synfig. He is proofed: for a person skilled in computer animation learning Synfig is a question of one-two weeks.

Considering me as director and person, who can do animation and some drawing, I can see those artists can form the core team, competent to complete the Morevna Project Demo at desired quality level. We’re only lack the background artist, but I have someone on the horizon.

And while it looks like we have staff gathering, the only question is Time. The fair truth of this world is that the artists work in first place on those things, which they paid for. All contributors working on the project in their free time. Everyone should make their living and most of them have daily full time job. With the the project of such scale it is no wonder that it is going at such rate and at current stage it is the main problem.

From the beginning  the Demo was created with the motto “what could be done on pure enthusiasm”. But now, as we slowly get crew forming, I’m starting to think about possible ways to get the funding for the project to allow artists work on it for several months. In fact, the question for me is stands in that way: find a funding or it takes forever. And here comes another question – how many of contributing artists ready to work on the project for the full time? Who of them is ready to drop their daily work and dedicate 3-4 months of their time to the project?

And now, right at the moment when we started to talk about money, things getting serious and there should be guarantees the project to finish successfully. Here’s one last point that comes up, that remains unclear.

As many of you remember, right from the start I have chose to use soundtrack which we haven’t permission to use yet. My initial plan was to clear that point when all footage will be finished, that way we would have more chances to be treated seriously. But as things turning out that way, I think it’s no harm to make attempt to settle this question now.

The problem here is that I don’t know how to handle juristic side of this question. First I need to know numbers. I need to know (at least approximately) how much licensing could cost.  Per Gessle apparently is signed with BMI. Unlike ASCAP, BMI has exclusive licensing contracts. But as stated here:

OK, the publisher among other types of media rights does offer “Internet” (streaming and/or downloadable, in-context use only). Purchasing such license is suitable to have permission to publish song together with all animation sources (what we plan to do at the end), but of course this will not allow to create derivative works, which is not fun. Maybe  I should find a way to contact the author, showing him the project results.  and find out what he is thinking about releasing composition under some libre license. But again, I need to know if he can do that considering conditions of current contracts. %)

OK, well, that’s enough of rants for today.  I guess you got the picture. We’re still moving on.  Stay tuned!

Internet (streaming and/or downloadable, in-context use only )